Swap execution facilities have been meandering along for three years now, most of the nonincumbents dropping by the wayside, volume in the doldrums for over a year, and … boom! By the end of Q4 2016, this market is finally starting to get spicy: At long last, SEFs seem to be showing a strong pulse, and then some, while still being at least a year ahead of any EU trading mandate on OTFs. Hey EU, nine years after the 2009 G-20 Pittsburgh agreements, better late than never to catch up with the U.S. and Japan (and it’s not like the Securities and Exchange Commission is going to beat you to it).

Will the Trump administration trash this sudden market progress with its much flaunted intention to overhaul and gut the Dodd-Frank Act? Well probably not Title VII, maybe at most tweaking RFQ and trading mandates. Quite the contrary—the anticipated Trump-related domestic volatility and global friction will only serve to drive SEF volumes higher.

At long last, three years after the SEF trading mandate went into effect, SEFs finally seem to be getting their sea legs. SEF doldrums be gone: Strap in, as 2017 appears set to be a bumpy OTC derivatives ride.

For more on SEFs' performance in Q4 2016 and the year overall, see my report Swap Execution Facilities Review: Q4 2016 and 2016 Annual Update or view the brief webcast below. 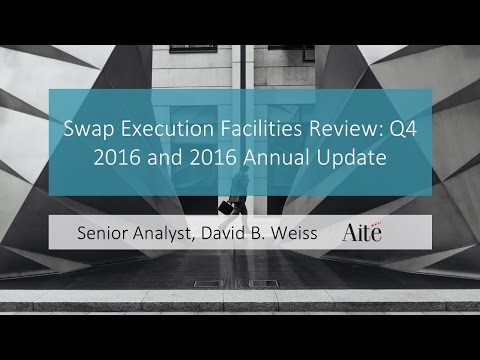